Home / Flashlights / Best AA Flashlight 2020
"This site contains affiliate links to products. We may receive a commission for purchases made through these links."

You may need a flashlight as part of your kit for camping or hiking, or it may be needed for the home in case of a power outage.

It can prove to be a handy tool to have around in order to assist with safety in a range of situations.

No matter why it is required, you will want a flashlight that you will be able to rely on, which will be powerful enough for its intended use and will not fail when you need it most.

Accordingly, by considering our guide, you will find it easier to obtain the best AA flashlights.

How to Choose an AA Flashlight

This Streamlight 90540 Survivor Flashlight looks like a serious piece of equipment and like a step above the average flashlight that most people have in their kitchen drawer.

It looks like the type of torch you would take with you on a wildlife adventure, or that you are recommended to have in the car when driving in bad weather.

I tested it out in a scenario as if I had broken down and needed to fix my car in the dark.

It is handy in that it can stand on a flat surface, unlike cylindrical flashlights that can roll when trying to focus the beam.

It can also be hung up, which is excellent when trying to look under the hood in the dark.

The intensity of the beam can be adjusted between low and high and it even has a flashing mode, which is ideal as a warning on a broken down vehicle.

An impressively powerful flashlight that can be a benefit in many circumstances.

This flashlight looks more like the traditional one that you would expect an average household to have, however, there are some differences.

It is the type of grip and the overall appearance that creates this impression. It feels as though it is designed to stand up well in harsh conditions and would be easier to use in this type of scenario.

It has the added benefit of being water-resistant, so I had no qualms about taking it out with me in the rain. I shone the beam in front of me during quite a steady rainfall without attempting to shield it and it maintained the bright white light.

It was none the worse for wear and worked again fine after it had been left to dry.

It also felt much safer to use by being able to slip the handle over my wrist, which helps reduce the risk of it being dropped. Though for testing purposes, I did drop it onto some ground that was sparsely covered by grass, and there was not even a flicker in the beam of light.

Recommended flashlight for those who like a bit of adventure. 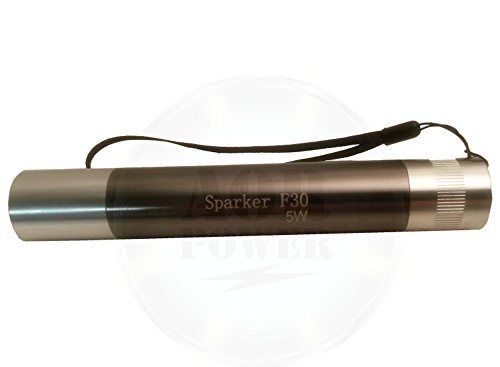 This is the type of flashlight that you can keep with you in your bag or your pocket in order to provide light that you require when being active.

It is a handy size that makes it a convenient tool to be able to carry around.

The AOR Flashlight is deceptively powerful as it is so small, you would not expect it to be able to offer much. However, it is actually quite hardy without needing to be big or heavy.

The light beam actually surprised me as I was not expecting it to be so bright, but it was really impressive.

Out on a walk in the woods, in the dark and with a light fog, the flashlight was sufficient to enable me to see where I was going and lit the way at least 100 yards ahead of me and even further.

Great little flashlight for in or out of the home. It’s easy to see why it is one of the best AA flashlights.